The Ninjettes are coming back!

Thanks to writer Fred Van Lente (Incredible Hercules, DIE!namite) and artist Joseph Cooper the Ninjettes are getting their own series.

Government forces think they have a solution to stop violence with young people. Based on a “Profile” they feel pinpoints those prone to violence a program has emerged. Whisked away blinded by black hoods, forcing them into a brutal battle royale deathmatch which determines which will move onto an elite black-ops assassin training program.

According to Dynamite’s press release “My favorite thing to do in comics is to put characters in extreme situations and see how they react–and how they’re changed by the experience,” said writer Fred Van Lente. “This is definitely an extreme instance of that! Steph doesn’t want to participate in the Ninjettes program–she wants to bring those behind it to justice–but in order to do that, she might just have to come in first place in this murder contest. How does she reconcile that with her ideals? So even though this series has got bloody ninja action, it’s also got heart, is what I’m saying.”

“The Ninjettes first appeared in the early arcs of Jennifer Blood as created by the legendary Garth Ennis. In that iteration, they were a crew of misguided teenagers who dressed as Japanese schoolgirls and wanted to be mercenaries – only to be slaughtered by Jennifer. Al Ewing would go on to reveal their origin in their first spinoff series. Now fans can discover a new take on the concept with Van Lente and Cooper.” 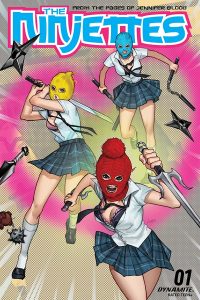 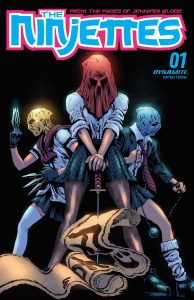 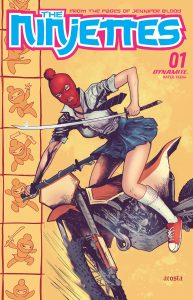 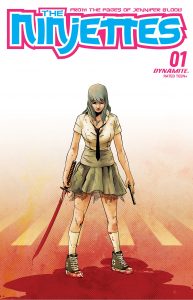 NINJETTES #1 is solicited in Diamond Comic Distributors’ July 2022 Previews catalog, the premier source of merchandise for the comic book specialty market, and slated for release in September 2022. Comic book fans are encouraged to preorder copies of the issue with their local comic book retailers. It will also be available for individual customer purchase through digital platforms courtesy of Comixology, Kindle, iBooks, Google Play, Dynamite Digital, ComicsPlus, and more!

Dynamite was founded in 2004 and is home to several best-selling comic book titles and properties, including The Boys, The Shadow, Red Sonja, Warlord of Mars, Bionic Man, A Game of Thrones, and more. Dynamite owns and controls an extensive library with over 3,000 characters (which includes the Harris Comics and Chaos Comics properties), such as Vampirella, Pantha, Evil Ernie, Smiley the Psychotic Button, Chastity, and Peter Cannon: Thunderbolt. In addition to their critically-acclaimed titles and bestselling comics, Dynamite works with some of the most high-profile creators in comics and entertainment, including Gail Simone, Christopher Priest, Leah Moore, Kevin Smith, David Walker, Vita Ayala, Danny Lore, Neil Gaiman, Garth Ennis, Darick Robertson, Mark Russell, Brandon Thomas, Amy Chu, Reginald Hudlin, Nancy Collins, David Walker, Steve Orlando, Greg Pak, Jenny Frison, Matt Wagner, and a host of up-and-coming new talent. Dynamite is consistently ranked in the upper tiers of comic book publishers and several of their titles – including Alex Ross and Jim Krueger’s Project Superpowers – have debuted in the Top Ten lists produced by Diamond Comics Distributors. In 2005, Diamond awarded the company a GEM award for Best New Publisher and another GEM in 2006 for Comics Publisher of the Year (under 5%) and again in 2011. The company has also been nominated for and won several industry awards, including the prestigious Harvey and Eisner Awards.

Dyanmite Comics gets into NFTs