The Witcher 3: Wild Hunt is amazing. It doesn’t come right out throwing you into battle and you may find it a little bit slow to pick up in the beginning. Push past that and you will enter into a world of beauty, mystery, violence, love, and deceit. There are tales of lore, contracts, stories, and kinfolk. It makes no difference if you have played the past Witchers since CD Projekt Red allows you to emulate a Witcher 2 save. You don’t have to do this, but it might add some filling to your story and how your game turns out. 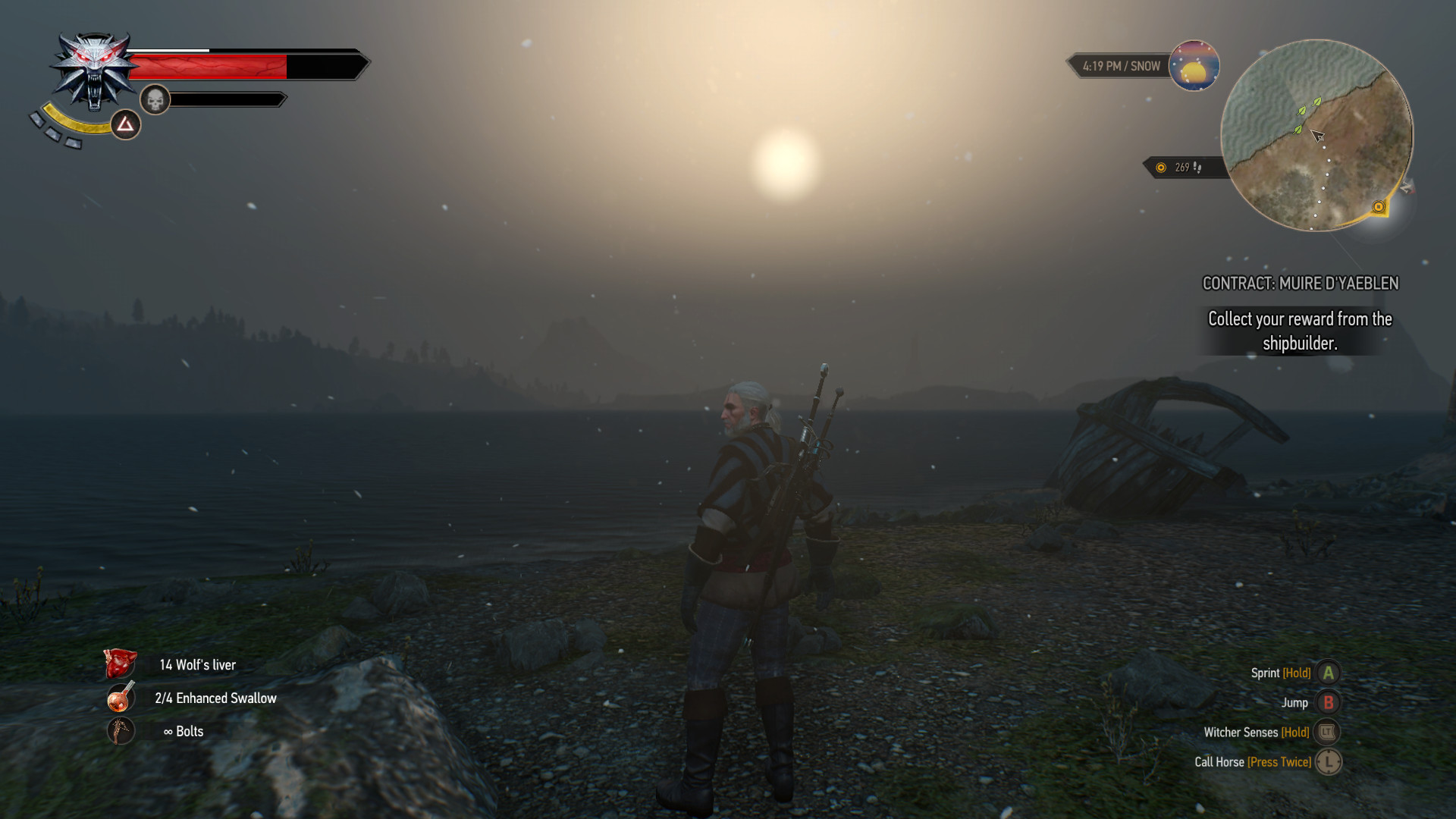 The Witcher 3: Wild Hunt is as good as it gets. There has been no other RPG that can compare or even come close to this beautiful game. It has a day/night cycle built-in. Sunrises, sunsets, rain, snow, an illustrious ocean, and a gorgeous skyline in a breath-taking open world. Once you start moving around you will come across countless hours of towns, bandits, enemies, and random wildlife. Every now and then as you approach enemies or bandits Geralt will say various remarks as he is battling them.

As Geralt travels through this majestic world, he encounters many different types of loot, whether it be weapons, armor, crafting parts, or crafting diagrams (and more). Therefore, there is an abundance of items to add to your inventory, thus requiring constant and careful management of your backpack. At first glance, those new to the series may liken the system to the familiar Resident Evil or Diablo-type arrangement of goods, but appearance is where the similarities end. Instead of grid spaces being the sole limitation on carried goods, The Witcher 3 takes it a step further and includes a weight restriction. This leads to Geralt oftentimes becoming “encumbered” by extra weight well before the “space” is full on the inventory screen due to certain weapons or pieces of armor having exponentially higher weights than others. You’ll want to make sure you drop, sell, or break down bludgeon damage weapons that are similar or less effective than your primary weapon, as they seem to have the highest impact on Geralt’s carrying capacity. Holding on to too much will limit your running ability and decrease stamina regeneration – both critical impairments in a game that demands precise control of your character in combat situations. That said, CD Projekt Red balances this challenging mechanic by allowing you to carry a seemingly unlimited amount of crafting parts, as they only weigh a minuscule 0.01 pounds. This saves you from tediously managing these alchemy ingredients and instead encourages you to use them often. You can also increase inventory weight by purchasing saddlebags for your horse, so as long as you don’t carry a bunch of extra weapons/armor you shouldn’t be significantly held back due to backpack restrictions.

While the aforementioned inclusion of the weight attribute definitely adds an interesting challenge, we can’t give the same praise to the durability stat that negatively affects both weapons and armor. As you battle countless enemies throughout the journey, both weapons and armor degrade and lose their efficiency. One could argue that this fits the style of such an otherwise masterfully complex game, but the details of implementation are cumbersome. For example, weapons, in particular, seem to hit that warning level of 50% much faster if you are fighting creatures/monsters or bandits of higher level, even if they look exactly the same as their lower-level counterparts. Yes, a greater amount of strikes required to defeat a similar enemy with more hit-points (HP) could equate to more deterioration in the end, but the overall problem is the rate at which this occurs. An attack of three strikes on a level 8 Drowner, for instance, appears to decrease the stat more than an equal attack on a level 4 – meaning each hit actually uses more durability in the higher-level battle. Nevertheless, even when ignoring this discrepancy, these items seem to need attention from your repair kits or a village blacksmith much too often throughout the game. In our opinion, costs for these repair methods are too high, especially before you progress enough through the game to really start acquiring a lot of Crowns/Florens/other currency. This not only applies to the merchants’ pre-crafted repair kits, but also to crafting parts they offer for making your own. Since these parts are sparse in the field of battle when compared to potion/magical alchemy parts, you’ll find yourself purchasing them more often.

It seems that developers set such a high rate of degradation to encourage players to visit blacksmiths more often or constantly experiment with different weapons. But when gamers like us find a weapon they truly love, they don’t typically want to part with it until absolutely necessary due to either insufficient attack speed or damage. However, there were a few times that I needed to drop/switch my diminished weapon of choice because I was unable to craft a repair kit while exploring a cave or heavily-guarded area. We can’t stress enough how crucial it is to have proper crafting parts and/or repair kits, especially if you want to keep your favorite enhanced gear. One can only hope that a future update will tweak the overall execution of the durability stat because it is one of the only qualms we have with the entire experience.

Beautiful graphics, addicting gameplay, and an intense storyline are some of the things you can expect when playing the new Witcher 3. Whether you are in or out of cutscenes, the graphics are amazing. Concentrating on leveling and completing witcher contracts while progressing through the storyline is a challenge in and of itself. Making sure your gear is up to par while progressing can count for several hours of gameplay and it can be quite challenging to find some of the locations to acquire the gear as well. The game as a whole is addicting, but what I’ve found to be even more addicting than the storyline is Gwent. 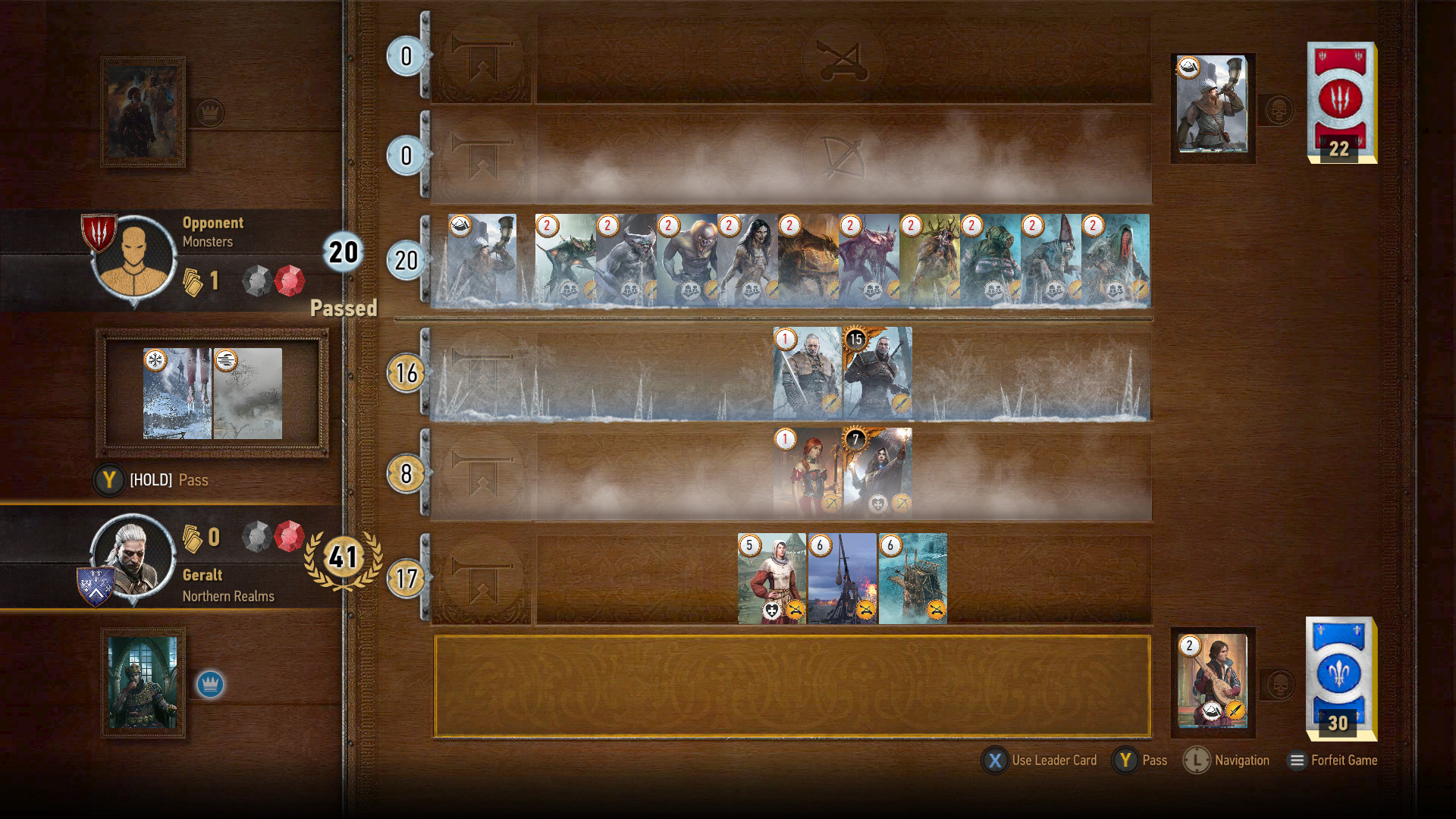 Gwent makes you utilize strategy – searching for cards, attempting to acquire the right heroes for your deck, and stacking the deck in your favor. I’ve heard a lot of people complain that they don’t like Gwent mainly because they don’t understand the strategy. There are two types of strategy that work really well for me, which is to play conservatively and make the AI run out of cards or the cutthroat way and take the first two rounds and be done with it. I will say it is harder to play cutthroat when you’re just starting out because your deck isn’t stacked well enough to handle that. In order to be able to do this strategy, you’ll need to spend a lot of time searching for cards to buy from innkeepers all over the world. The cards you truly want are the hero cards, which can’t be acquired with a little bit of coin. Getting them requires skill and challenging battles of Gwent.

The combat in Witcher 3: Wild Hunt may seem complicated at first glance to someone new to the series, but it’s really simple to catch onto. You have slots for your two swords, one for beast and one for man. You have a slot for your crossbow, food/health potions, bombs, and even a mask if you wish to pick one up later in the game. There’s a quick attack and a powerful attack which you can couple by adding glyphs onto your swords that will add a percentage of stun, stagger, freeze, fire, etc possibility. You can even add enhancements to your clothing that will increase the power of your magic abilities.

It is very easy to get caught up in the main story and keep pressing on forgetting about all the side quests. Take time out from the story to keep checking your other quests, witcher contracts, and treasure hunts. It’s very easy to find your way around with the marker on the map that tells you where to go. Keep in mind it is possible to miss a side quest because you completed the main story quest and kept moving on. It will fail the side quest and there is no way to reset this. There will be times as well when you may want to do a side quest and find the marker that may take you to a fast travel sign only. This is because some side quests require certain main story missions to be active or completed, and in some cases, some side quests have to be completed before some story missions.

The Witcher 3 graphically, is an amazing piece of work. From the moment you start up the game and make Geralt go on to the balcony and look at the mountains, you immediately feel like you are right there in the game standing next to Geralt. Everything in the world is very detailed, from the ghouls eating dead bodies from past war battles all the way to the flowers that cover the fields. This is surprising since The Witcher 3, is being described as, “20% larger than Skyrim.” Each location is different, not nearly the same. This is unlike many other games where you would see the same tree or rock, making each location almost identical. 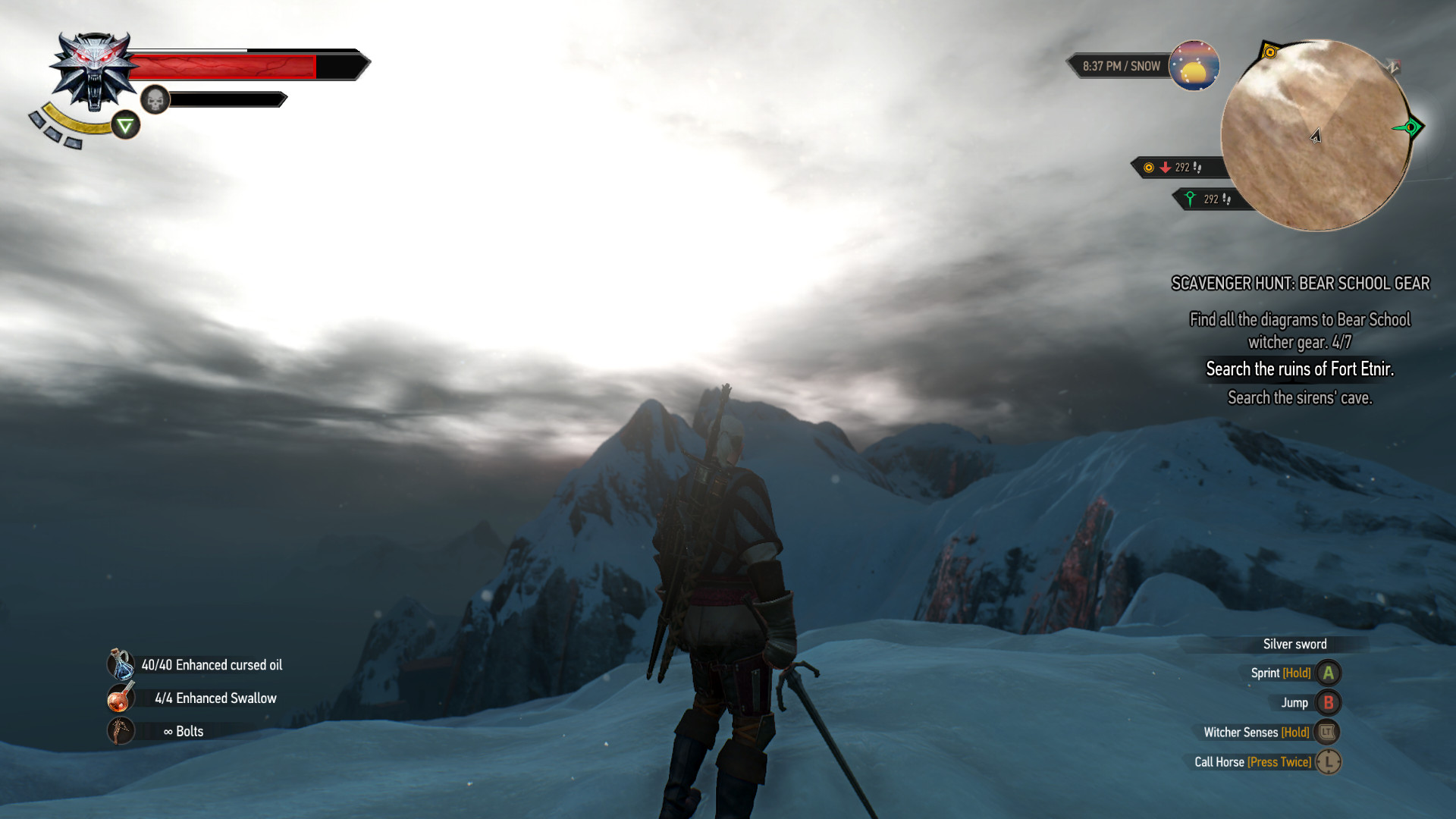 It is very easy to be distracted from playing the actual game. For example, when the sun begins to set, changing the sky from a blue to a darker orange, you often times become tempted to stop doing a quest and simply watch alongside your horse, Roach. The Witcher 3: Wild Hunt is not only a game, but it is also a beautifully crafted piece of art and we hope you enjoy your journey as much as we have

The rumored God of War Ragnarok reveal not happening